*7-10 Days Fast Shipping! *Free Shipping For All. *Due to the Covid-19, the freight esped may be affected, please understand!

440 Hz is the standard accepted pitch reference for tuning musical instruments. 432 Hz is an alternative pitch argued by some to be superior due to personal preferences or spiritual beliefs.

If we didn’t have a standard pitch reference then musical instruments would sound out of tune with each other. In the past decade, there has been much debate over whether 440 Hz is better or 432 Hz is, mostly fuelled by a massive amount of misinformation surrounding support for 432 Hz.

This has resulted in some people believing that 432 Hz is the ‘frequency of the Universe’ with spiritual benefits and esoteric healing powers, among other things (check out this article to separate fact from fiction).

With all that aside, we should let our ears decide which we prefer! 432 Hz is an alternate tuning system for musical instruments, which is slightly lower than the international standard of 440 Hz tuning.

In the case of 432 Hz, the main argument supporting this is that the 8 musical octaves of C would come up to being even integers or whole numbers. For instance, the C1 frequency would be 32 Hz, C2 64 Hz, C3 63 Hz, and so on. In the A440 system, they come up with some very uneven numbers. But does that really make any difference?

Some people believe that music from instruments to 432 Hz is warmer and easy on the ears. Others find it to have a brightness that brings mental clarity.

The biggest proponents of 432 Hz can be found in meditation and relaxation music who boldly claim that it is harmonically richer and ‘in-tune’ with nature.

Check out the videos below to hear the differences in pitch. Paul Davids, a famous YouTuber, did a great video where he plays the same tunes in 432 Hz and 440 Hz side by side to let your ears be the judge.

Adam Neely also gave his take on the two frequencies in this video.

The A4 note is 432 Hz. This A = 432 Hz is also known as “Verdi’s A,” after composer Giuseppe Francesco Verdi, an Italian composer who stated that it was ‘mathematically consistent with the universe’.

Initially, there was no standardization in terms of tuning instruments to a certain pitch. According to this, each orchestra would have been tuned to a different pitch from each other. However, since the 18th century, a tuning standard was established for Western music.

The A above the middle C on the piano (also known as A4) has been the tuning standard. The range of A4 lies between 400 and 480Hz. The unit of Hertz (Hz) which measures a cycle per second was named after the physicist Heinrich Hertz. He proved the existence of electromagnetic waves in 1830.

With the advent of the tuning fork in the early 18th century, aficionados like Mozart, Bach, and Beethoven tuned their orchestras to a different pitch. This pitch differed based on whose tuning fork was used.

While the International Organization for Standardization set a standardized pitch of 440 Hz for A4, this isn’t universally accepted for all orchestras.

The Boston Symphony Orchestra uses 441 Hz, the New York Philharmonic Orchestra uses 442 Hz whereas many symphonies in different parts of Europe use 443 Hz or 444 Hz. Very slight differences in the pitch can be heard.

A440 is also known as the Stuggart Pitch, which corresponds to the audio frequency of 440 Hz. It has been standardized by the International Organization for Standardization as ISO 16. A440 is commonly used as a concert pitch in the UK and the US.

However, in certain parts of Europe, it varies from 440 to 444 Hz. A440 Hz is also used commonly as a tuning reference for intonation regardless of the fundamental note or key. There have been long-standing debates on which frequency is the better of the two, and just like any other debate, there are varying opinions on this as well.

Instead of presenting one side of the argument, we’re going to show you 4 different (and conflicting!) arguments that you will see repeated online.

Let’s go through the reasoning behind each argument:

Argument 1 – ‘Live and Let Live’. They’re both valid. It’s a matter of preference. End of story!

Both frequencies are fine. They are both valid, and it’s a matter of personal preference whatever you prefer. I like this argument. In fact, I think it should be the mindset when it comes to most differences in life!

I’m completely fine with people choosing 440 Hz or 432 Hz based on their own personal preferences or beliefs. Tuning frequencies tend to be quite arbitrary. I don’t think we need to speak in ‘absolutes’ about this topic, because most arguments between these tuning frequencies are very subjective.

However, just because you like the sound of 432 Hz does not mean that you should spread misinformation about it! If arguing in favor of 432 Hz, make sure you get your facts from reliable sources.

Argument 2 – Stick with 440 Hz Because it’s the Standard

440 Hz is the standard tuning. We should follow the standard. 432 Hz just makes things awkward because any instruments tuned in this fashion won’t be in tune with most other instruments.

This is particularly tricky with instruments that cannot be tuned, for example, a steel tongue drum tuned to 432 Hz will sound completely out of tune with other standard instruments tuned to 440 Hz.

Countless millions of musical instruments, tuners, and musical software all use 440 Hz as the standard. Switching to 432 Hz at this point would be quite unfeasible, even if there was any solid reason to do it.

Others go as far as to say that A440 has spiritual healing properties, which are quite contrary to what they believe are agonizing and irksome properties of A440. Thus, A432 is often preferred by people for meditation, healing, and spirituality.

Another reason why some people prefer 432 Hz over 440 Hz is that they believed it to be an ‘auspicious’ frequency that can help immensely in the spiritual development of listeners. Proponents of this frequency believe that it helps develop inner peace because it is seemingly clearer than A440.

Some limited studies argue that that listeners do feel more relaxed and calmer when listening and playing at A432. However, due to small sample sizes and ‘self-reporting’, these should certainly not be treated as fact.

If people have a better experience listening to music at 432 Hz then that is great for them! However, supporters of this as a pitch reference have been let down by misinformation about 432 Hz and its correlation with history and nature. This great article lists out the fact vs fiction in this regard.

There isn’t really any solid evidence that makes A432 better than A440. I think we need to make it clear that most of the arguments in favor of 432 Hz are fiction.

However, if a person genuinely gets more enjoyment from A432 for their own personal listening and spiritual practice then why would you want to take this away from them?

Many others completely reject the argument that 432 Hz is superior to 440 Hz as a pitch reference, mostly because the 432 Hz side of the argument is often shrouded in misinformation.

Also, keep in mind that the studies and reporting of people’s personal preferences between the frequencies may be extremely biased in this regard. For example, those that practice meditation may subjectively believe that they prefer 432 Hz when they hear this frequency, solely because they have been previously primed to believe that it’s superior through people and publications that they’ve been influenced by.

Those that reject the 432 Hz debate generally push for facts. In this case, objective blind tests between large numbers of people on their preferences between 432 Hz and 440 Hz are the only tangible option.

However, even if the results were to swing heavily of a preference towards 432 Hz, those that reject the spiritual significance arguments are always going to argue that the results are purely coincidental and that ‘correlation does not imply causation’.

How to tune instruments in 432 Hz?

Following the current standard, most instruments are tuned in 440 Hz and more tuners have it as the default setting.

However, some tuners allow you to switch frequencies and tune your instrument to 432 Hz. This option applies to many chromatic tuner pedals, clip-on tuners, and tuning apps on your smartphone.

How to measure hertz in music?

You can measure the sound waves of music using a device called a spectrum analyzer or frequency counter. Generic devices like digital multimeters can also be used for the same.

If you search for apps on Play Store, you’ll find options like Spectroid or Audio Frequency Counter that are ‘real-time’ audio spectrum analyzers that use the microphone of your mobile to convert the sound wave and display the frequency.

432 Hz and 440 Hz are two different frequencies associated with musical notes. 432 Hz was the standard frequency for six centuries before 440 Hz became popular in 1939.

People who prefer 432 Hz argue that it sounds more natural and pure. Some artists prefer playing their musical compositions at this frequency because they believe it has spiritual properties while others play them at 440 Hz simply due to habit or because they don’t even know there’s a difference.

Following the current standard, most instruments are tuned in 440 Hz and more tuners have it as the default setting. However, some tuners allow you to switch frequencies and tune your instrument to 432 Hz. This option applies to many chromatic tuner pedals, clip-on tuners, and tuning apps on your smartphone.

We play music because it ‘resonates’ with us. Musicians may eventually stray from the A440 system to explore other ideas just like every guitarist will search past the EADGBE tuning to explore uncharted territories!

However, keep in mind that 440 Hz is here to stay and the world is not going to go switching to 432 Hz any time in the near future, particularly when the main support for this pitch reference is driven by misinformation!

Back to blog
★ Judge.me Reviews

Let customers speak for us 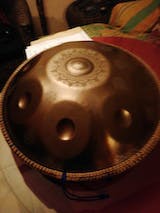 Hi, dear friend
I'm very glad to see that you like our handpan drum, and thank you for your honest review.
You are our valued customer, we will inform you as soon as there are new promotions.
wish you a happy life.
Best regards
HLURU

Hello, dear friend
Very happy to see that you like our drums. At the same time, thank you for your five-star review, and welcome to visit us again.
wish you a happy life!
Best regards
HLURU

Á
Hluru Hand Braided Decorative Rope For Handpan Drums - Hemp on the outside, Nylon on the inside Ágoston Péter
It's ok

Made of raw, natural rope.

I received my handpan in a very short period of time. Quick service! The quality of the handpan is really good. They also tell you how to maintain your handpan.
The team at HLURU are very friendly and helpful. They make sure your are happy with the handpan before you purchase it.
Thanks HLURU! =oD

Very happy to see that you like our handpan drum and thank you for your kind review.
It is our aim to provide the best service to our customers, we wish you a great time.

This is my first hang drum. I love it so much. The tone is absolutely gorgeous. I am glad I went with the 432 Hz.

I chose free shipping and it was worth the wait!! Also the packaging was perfect and the drum arrived sooner than expected! I am very pleased with this company and their communication with me. They even sent me a video of the drum before shipping! This made me very happy.

Hi, glad to see that you like our drums. At the same time, thank you for your pertinent evaluation, your evaluation is very important to us. wish you a happy life!